A mountain as a wager: The story of an emperor losing the Mount Hua - Part #2


A mountain as a wager: The story of an emperor losing the Mount Hua - Part #2

For the background story, click: A mountain as a wager: The story of an emperor losing the Mount Hua - Part #1

The story of Emperor Taizu of Song losing the Mount Hua is the most widely spread in the folk story of Xiangqi in China. At that time, Emperor Taizu of Song was not a emperor yet. He was a regular military soldier of the Later Zhou dynasty and was using his personal name, Zhao Kuangyin. Zhao was excellent in Xiangqi. Due to his high level of xiangqi skill, he was started to behave cocky.


One day, Zhao traveled to Shannxi province for military task. On the way to Shannxi, he passed through Mouth Hua and has got to know Chen Tuan also excellent in Xiangqi. Zhao finally met Chen, and requested to play xiangqi game. At the first place, Chen had refused to play with Zhao. Zhao was short-tempered, due to his arrogance attitude, he has offered Mount Hua as a wager for the game. Finally, Chen agreed and both had signed on an agreement contract for the deal.

Zhao moves first for the first game. Zhao was playing very well in the first game, he attacked aggressively and had gained huge advantages. When reached to end game, Zhao has gained huge materials. As shown on the board below, Zhao still having chariot, horse and cannon on board, whereby, Chen only left single chariot. Zhao thought this was a sure-win game, however, Chen had managed to gain a draw. 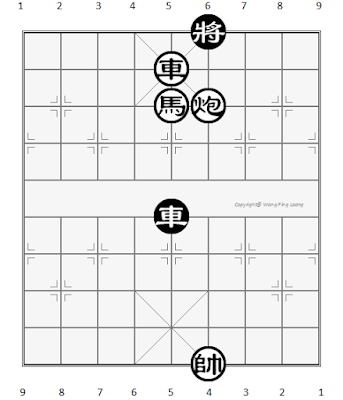 Red was Zhao, Black was Chen.

Red C4-2 was a waiting move.
If Black played R5-3, Red would have been won the game.

Both agreed for a draw.

We will talk about second game next time :)